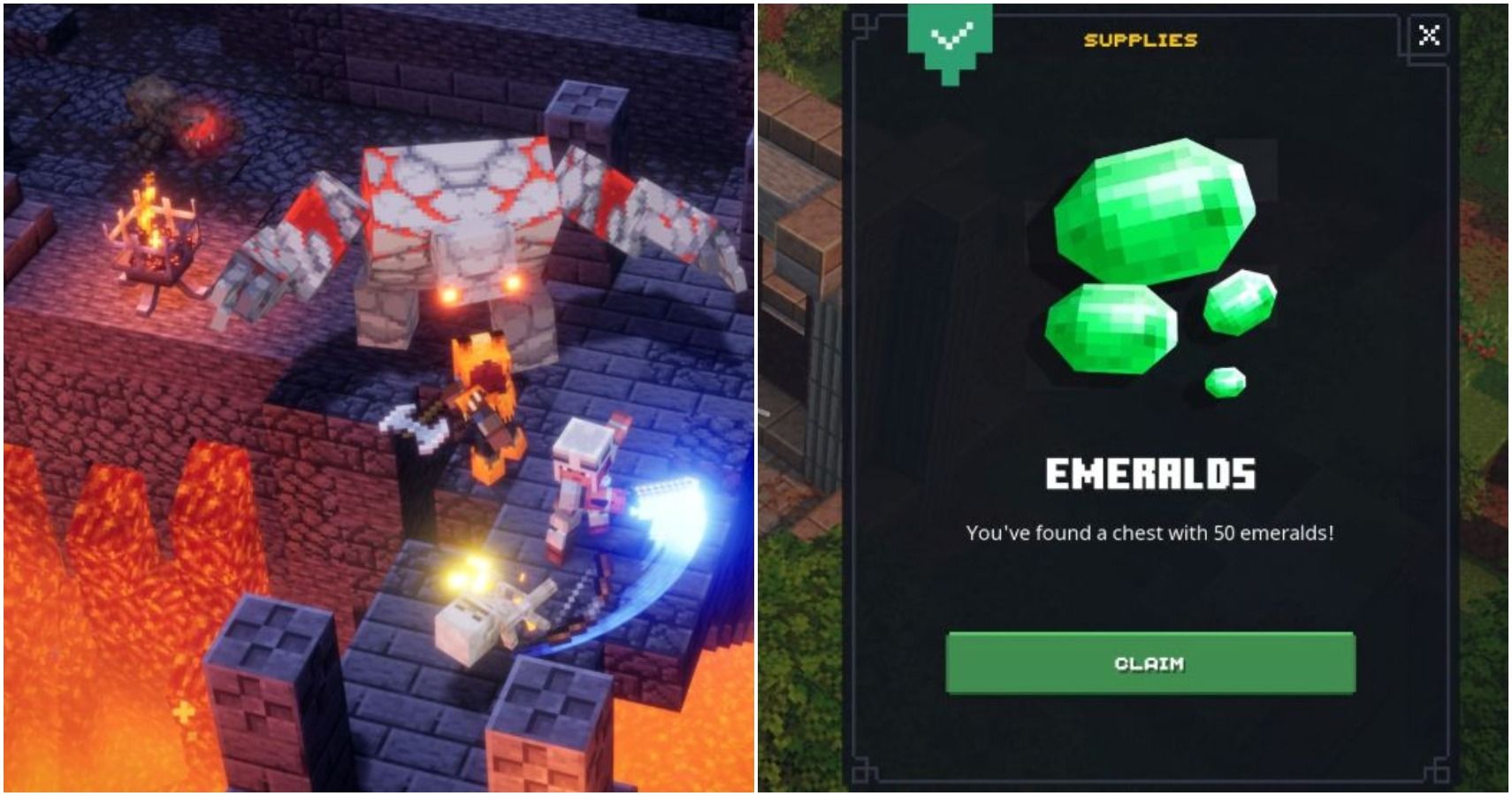 Minecraft Dungeons is jam-packed with content, and there’s a bunch of stuff players missed as they ventured through all the different levels. Unique pieces of gear and secret levels were easily overlooked by unsuspecting players who were only trying to complete the game’s main dungeons.

RELATED: 10 Things We Wish We Knew Before Starting Minecraft Dungeons

Unique equipment is abundant in Minecraft Dungeons, and players will quickly find out by defeating various in-game bosses and looting chests in dungeons. An example of unique and powerful gear is the Red Serpent Bow which gives arrows a chance to explode on impact with an enemy.

However, with so many unique pieces of armor and weapons that fans can find, there was bound to be a bunch that players missed their first playthrough of the game. Players should take the time to research and farm the different equipment, because some of them are extremely fun to use, but also very rare.

The Creepy Crypt is a hidden level that fans can find by venturing into the Creeper Forest dungeon. Players who venture there will find a vast crypt level with a bunch of undead mobs to slay. Players will discover this location by pressing a Redstone Switch in the Creeper Forest Temple.

Similar to other hidden levels in Minecraft Dungeons, there will be a bunch of gear for fans to find here and plenty of hidden chests for players to farm emeralds. Unfortunately, many players have completely missed the Creepy Crypt level as it is well hidden in the game.

8 Emerald Chests in the Homeworld

There are a few hidden Emerald Chests scattered around the homeworld of Minecraft Dungeons, and players will have to search the camp if they want to get 50 emeralds per chest.

Many players haven’t explored their camp, and as such never found these chests; however, they are a great way to get a bunch of emeralds early in the game. For players who haven’t gotten their free emeralds yet, they can do so by exploring the area and opening the chests. is as simple as that but also very easy to forget.

The most special thing about this sword is how iconic it is in Minecraft, and it translates well Minecraft Dungeons because of the hack and slash gameplay. Hopefully everyone is lucky enough to find one at some point in their adventures; however, unfortunately, many players will miss it altogether.

This hidden level can be discovered in Pumpkin Pastures, and players will find it to be very different from the dungeon it is derived from. Just like the other secret levels, many interesting enemies and pieces of equipment can be found in this location, and it’s worth checking out for players who want additional content to complete after completing the basic levels. Players will be able to get to Arch Haven by entering through a door on a wooden boat.

Arch Haven is an interesting level that resides near the ocean, and the ambiance of this location will add variety to a player’s dungeon crawling adventure with plenty of mobs and gear to grind!

Many players will miss Apocalypse mode because it is so difficult to access as it requires players to have beaten both the default difficulty and adventure mode.

Completing Adventure Mode is a challenge in itself, and this mode will be even harder to complete, which is why so many players never get the chance to experience it. These levels are at least worth trying for players who complete Adventure Mode, as they add a unique twist to the sometimes repetitive levels of Minecraft Dungeons. Don’t forget to bring powerful gear!

There are different chests hidden in each level of Minecraft Dungeons, and players can find them by deviating from the beaten path and venturing down hallways. Each level should have at least three of these chests each, and they will contain both emeralds and unique pieces of gear.

Many players stay on a very linear path while completing Minecraft Dungeons for the first time, and as such, they’ve never opened a bunch of those chests, which just makes replaying the levels more interesting.

The Underhalls are a secret level that starts from the dungeon of Highblock Castle. This location is filled with catacombs and other spooky atmospheres that will scare players for their lives in the game. This level can be unlocked by interacting with a scroll on a pedestal in Highblock Castle.

The Underhalls were easily missed by almost every player, and it’s a worthwhile experience to return to after completing the game, as it will add quite a challenge to the aesthetics of Highblock’s castle.

Every player has experienced the boss battles in Minecraft Dungeons, but a lot of players skipped mini-boss fights like the Enderman. Although many of these mini-boss fights appeared in the game’s main dungeons, many players decided to skip them because they weren’t required to advance to the next dungeon.

This is unfortunate to some degree, as some of these mini-boss fights are very unique and add a distinct challenge to some of the more repetitive monsters in Minecraft Dungeons. Hopefully fans will take the time to fight these enemies, but since many players don’t, it’s worth mentioning.

“Loo!” is the best hidden secret level in Minecraft Dungeons. “Loo!” is also a Diablo 2 reference, and fans of the dungeon crawler will find a bit of nostalgia when visiting this level. This location can only be accessed after defeating the Illager boss on default difficulty.

Once a player has activated a secret pressure plate in each dungeon in the game, they can go to the camp shrine and press a button to spawn a group of hostile Mooshroom enemies next to them. It was great that this was added to the game, and I hope similar levels will be incorporated in future expansions of Minecraft Dungeons.

NEXT: The 10 Best Skin Packs For Minecraft Bedrock Edition

I’m sorry but Brock would be totally canceled in 2021

Your drying pan won’t protect you from the wrath of societal nullification, Brock.

Michael is a writer, gamer, and virtual reality enthusiast. He has been a hobby writer all his life and is now a content writer for TheGamer among other gaming websites. He is passionate about writing content that will entertain and share his knowledge about his favorite games. An aspiring writer, Michael is just trying to share his passion for video games with the world.