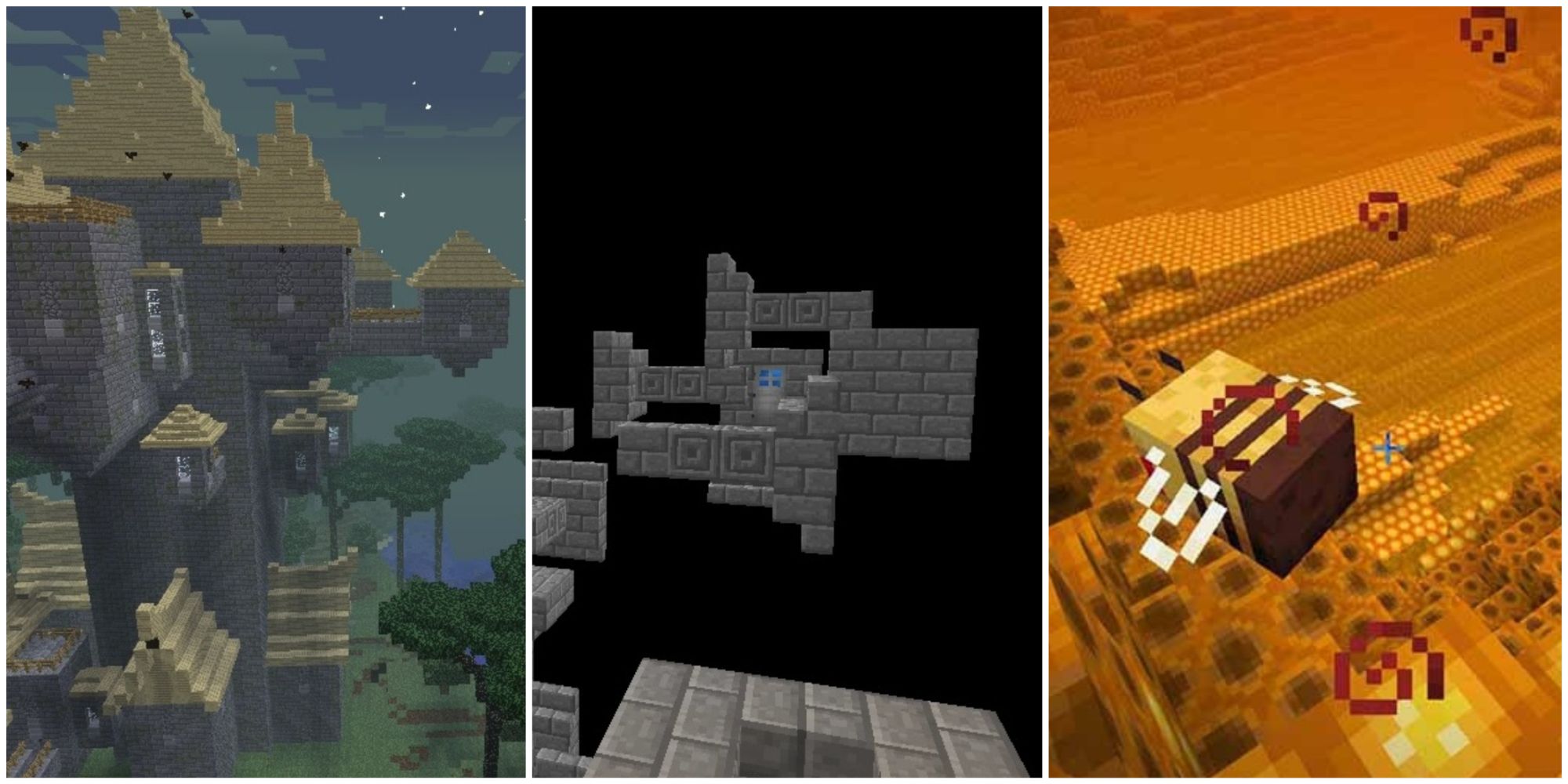 Each Minecraft seed generates an (almost) infinite world to explore, with each block configuration ad infinitum and beyond. But it’s boring, so let’s go to another world. Vanilla Minecraft has two alternate dimensions to explore (almost) endlessly – the Nether and the End, which hangs above the Void. However, once you’ve flown over an End Island, you’ve flown over them all, and it’s time to install some tweaks.

There are many mods that incorporate alternate worlds that can only be accessed through portals or rituals, or even an unsuspecting door standing on its own. Most of them are pretty wacky, defying the usual laws of physics and biology, but that also means new loot to hunt down.

Everyone loves bees. They’re not necessarily what gamers imagined when the Mojang team announced their arrival, as they’re certainly very big and blocky, but you can’t deny how cute they are. For those of us who just can’t get enough of their fuzzy butts and big blue eyes, you can visit an entire dimension within their hives, the Bumblezone. Obviously, destroying blocks or hitting a bee will enrage everyone nearby.

Irritating these little guys is a bad idea, because even full diamond armor won’t hold them back. Luckily, all of the loot here is bee-themed, and armor with flight can be found in hidden mazes. If you’re friends with some locals, you can hold them in a bee cannon, ready to shoot mobs to spread the bees’ wrath. There are even three new weapon enchantments, and Bane of Arthropods is actually useful now.

If you come across the guardian residing in a small village in your vanilla world, you have unlocked the chance to travel to the blue sky. Everbright and Everdawn are beautiful worlds, one cold and snowy, the other warm and tropical. Both are inhabited by new flora and fauna, and littered with devastating dungeons. Massive mazes with hidden keys and multiple floors must be cracked to reach bosses.

And each kingdom has its own respective guardian, hidden in a high tower, ready to be challenged. The mod expects you to arrive with friends and mid-level setups, but can be configured if you plan to try it alone. There are new ores, blocks, achievements and two new dimensions in this mod alone.

This realm is the opposite of the Nether, being out in the open on all sides with a blue and green color scheme. You’ll need a way to fly, otherwise there will be a lot of precarious bridges here, so grab an Elytra first, or keep an eye out for Moa nests to hatch your own steed.

Overworld tools are pretty useless here, so you’ll have to start fresh to craft Holystone pickaxes after hitting Skytrees. The different cloud types also produce different effects, with some being bouncy, while the golden clouds will propel you towards Terra Firma at an alarming rate. With three levels of dungeons to traverse, each with their own bosses and mobs, and the ability for enemies to drop useful gifts and accessories, there are plenty of reasons to travel the Aether.

Three pieces of magic chalk will need to be acquired from the pyramids in order to summon the portal to the dungeon realm. As for what you’ll find, the clue is in the name. You spawn in an unbreakable room with the key to one of the two doors. Every room is filled with enemies to slay and chests to loot – Runic Dungeons is the ultimate dungeon crawler mod for Minecraft.

Upon entering a new room, you’ll get another special key, and which door you choose to open is up to you. But if you somehow lose it, then you’re locked in, and the way to leave is to summon a Wither and defeat it unprepared. There are loads of cool layouts and treasures to hang out with, like a leash to ride any entity, as long as you go through the modded monster waves.

You come across an isolated door. He stands on an otherwise empty beach with no buildings to guard. If you dare to enter, you will be transported to another dimension, filled with confusing designs and absurd structures. It is possible to craft your own Dimensional Gates – Iron and Quartz will always open into an empty void, ready for you to build whatever you want.

However, a golden door contains hard-to-pass treasures and traps, as well as other doors that will often lead even deeper into these twisting dungeons. You might be tempted to just smash a few blocks and skip straight to the goodies, but these realms are guarded by Monoliths, ancient beings capable of teleporting anyone to Limbo. Crafting your own Rift Blade will push enemies away from you, back into the void they came from.

Jump into a puddle to enter the Twilight Forest, a generally peaceful dimension of giant trees, fireflies, and deer. Hostile mobs don’t spawn outside of dungeons, and the air is filled with twilight bugs. As you wander through this magical forest, you’ll come across eerie mazes and arenas, each only accessible as you progress through boss structures.

Defeat the Naga to begin your quest, eventually battling a Lich, a Snow Queen, and a disturbing giant reflection of yourself. However, if that’s not your style, there are still dozens of mystical biomes and exciting structures to explore, all of which carry a sense of fantasy.

A world overrun by Rotspawn, an insidious plague from the Other Side that infects blocks and spawns strange enemies. The Undergarden is made up of twelve biomes, mostly forests and oceans, but also swamps and caverns, with unique and well-designed monsters living in each. There are even neutral Piglin-like entities called Stoneborn that you can trade with. Most trades involve Regalium Ore which can be mined here.

This dense, lush dimension has a mini-boss, the Forgotten Guardian, a teal rock golem that drops Forgotten Nuggets on death. There are wonderful aquatic crowds swimming in the murky oceans and strange vegetation to discover.

This dimension comes with its own sad backstory; the races in the Trinkets and Baubles mod have been infected with parasites, leaving their treasures in their homes in hopes that an adventurer can save them. Arriving in the Lost Cities, you’ll be surrounded by tall skyscrapers and subway platforms, suddenly in the 21st century, but with hordes of infected monsters infesting the haunted buildings.

Related: The best quality of life mods for Minecraft

Bypass enemies in Lycanite, Familiar Fauna, and Vanilla Minecraft to find a variety of loot, ranging from Bread and Feathers to Nether Stars and Ancient Tomes. Don’t bother bringing a summoning staff, because pets and familiars won’t help you here. And dying won’t get you out, only finding the materials for another portal can get you home.

If the Vanilla Deserts aren’t up to the task, it’s time to travel back in time to the Deserts of Atum and try to survive the days of the pharaohs. Throwing a jeweled scarab into the portal will jump you into a richer and more diverse desert biome, complete with warlords and adorable camels roaming the sand. Ancient mythology is alive and well too, with pantheon artifacts hidden in ruins and pyramids.

Find and equip the Sun God Ra’s armor for a new achievement, as well as many other fun challenges. Villages have also been revamped, spawning mostly along rivers and surrounded by new trees and lush plants. Patrol villagers sport new tools and weapons available to craft here. But if you die, you’ll be sent straight home, back to your boring vanilla life.

If you’ve played any of the Myst video games, you’ll know where this mod goes. Directly inspired by them, Mystcraft encourages you to write your own adventure using Descriptive Books. The symbols written in these books create links to new ages (dimensions) which you can increase as you see fit. At first, the ages will be random, but as you gain experience, you can create your own worlds.

However, adding extra resources or mixing symbols can cause instability in these ages, manifesting in constant lightning, negative potion effects, or other dangerous environments. And if you don’t have a binding book at home, then you’re stuck there, with no legitimate way to access the Overworld.

Next: Everything Added In Wild Minecraft Update 1.19

2022-07-22
Previous Post: How to Create a Track in Minecraft 1.19 Update
Next Post: Minecraft just banned the discovery of net worth devices