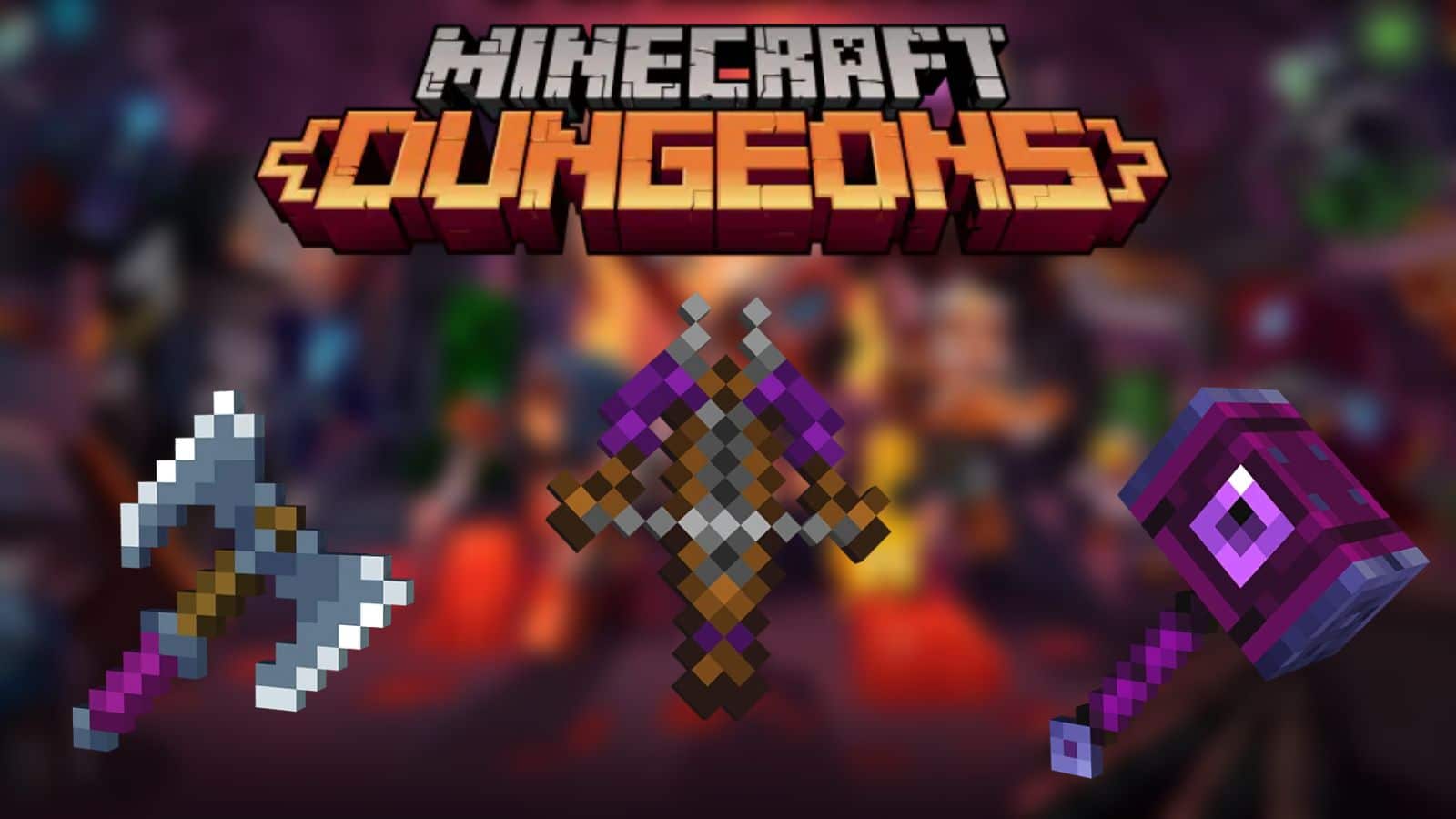 Finding the best weapon in Minecraft Dungeons can mean the difference between success and failure, so here are the ones to look for.

While Minecraft is about building, Minecraft Dungeons is about destroying. Or at least save innocent people and fight vicious mobs. It’s an exciting game that combines tactics with powerful armor and weapons to make you feel like a real hero.

However, it’s hard to feel like a true hero when you don’t have a weapon powerful enough to defeat the Arch-Illager. So if your weapon just isn’t enough, search out some of the best weapons in Minecraft Dungeons and watch the mobs disappear.

Cover enemies in deadly poison with this great weapon.

When it comes to fighting large hordes of enemies, there are two ways to defeat them. One of those ways is to let them surround you and hit them as quickly as possible and the other is to form a train and hit when you can.

However you prefer to attack large groups, the Venom Glaive will make it easier than ever. It can generate clouds of poison, damaging anyone within its reach. On top of that, you also have a longer melee range, which means you can take out enemies before they even hit you.

The Whispering Spear is a unique weapon that seems to know when you need it to start getting more powerful. It feels like every time enemies start to overpower you, this spear uses its hit ability twice and takes down a few without much effort.

This, combined with the long range and fantastic melee damage, will allow you to charge in and take out mobs without thinking. It also looks awesome when fighting with it.

Deals lasting damage to enemies when attacking with this axe.

Dealing fantastic burn damage while also being able to damage the enemy with normal melee and spin attacks, Firebrand is the weapon type you should keep if you are lucky enough to acquire it.

Such powers and damage allow you to hit once and let the enemy take damage for a few seconds after. This can often be the difference between taking down that boss or having it take you down instead.

Shoot hard and safe with this powerful bow.

Sometimes abilities can make or break a weapon, but the most powerful tools often don’t need a lot of them. All they need to be able to do is take down an enemy quickly and safely. Nothing says security like being as far away from threat as possible.

The Elite Power Bow doesn’t have too many special abilities. Instead, it’s mostly focused on damage and lots of it. It’s one of the most powerful weapons in Minecraft Dungeons and is often able to one-hit enemies when the fates align – keep that at all costs.

Push back the enemy with this powerful weapon.

When dealing with enemies at close range, all you have to do is pull out the Whirlwind Hammer and let it decimate the playing field.

In addition to powerful melee damage abilities, the whirlwind has an ability that launches shockwaves, sending the enemy flying when activated. This, combined with its spin attack, makes it a versatile and deadly weapon, perfect for fighting any of the tough bosses.

Heal and strike at the same time with this clever claymore.

Health is one of the most important aspects of Minecraft Dungeons. It’s literally the difference between life and death and low health will put you at a huge disadvantage in battle.

However, with a unique and powerful weapon like Heartstealer, you don’t have to worry about your health anymore. Heartstealer can draw health from mobs towards you, which means with each hit you heal. Not only does this restore your health, but it also knocks back mobs when you hit them, allowing for greater recovery and battlefield dominance.

Bring the enemy to you with this crossbow.

While many other powerful and unique weapons boast that they can knock enemies back, the Imploding Crossbow actually does the opposite. Each time you hit, in addition to having explosive arrows, you will also pull enemies towards you.

This is great for any co-op battle since you can stand behind your allies and pull them towards melee players. Tactics and a powerful weapon cause serious damage.

Feel like a god with this weapon in your hands.

Feel like Thor with this beautiful yet deadly hammer. The Gravity Hammer will pull in enemies and give you the ability to smash into the party, dealing heavy splash damage and annihilating multiple enemies at once.

It’s a slower weapon, but when used correctly and with technique, you can annihilate the toughest enemies, just like the thunder god.

Shoot lightning bolts at enemies with this awesome weapon.

Bows can be a risky way to fight. They force you to stay relatively far from the enemy and usually require you to run a lot, which can put you in a dangerous position.

That being said, if you’re using a weapon like the Lightning Harp Crossbow, you’ll feel much safer. This is mainly due to the fact that it deals impressive damage, fires multiple projectiles, and has the ability to ricochet off other enemies. All this, combined with an impressive design, is worth it.

Blast enemies with the cursed axe.

The cursed ax isn’t as bad as it looks, it’s more of a curse for the enemy than for the one who wields it.

This is thanks to the massive melee damage it is capable of as well as the fact that when you kill an enemy it explodes and deals damage to everything around it. It’s like an extra bonus to your attack. This, and the spin attack, make the Cursed Ax one of the best weapons in Minecraft Dungeons.

These were the best weapons in Minecraft Dungeons. Why not check out some of them while you wait to get some of those unique items you want:

Best Cheats and Commands | How To Join Minecraft RPG Servers | What does Depth Strider do? | The best servers for all types of gameplay | The best mods to download | Where To Find Pigstep Music Disc | Best Minecraft Seeds | What does Smite do? | How to Tame and Raise Horses