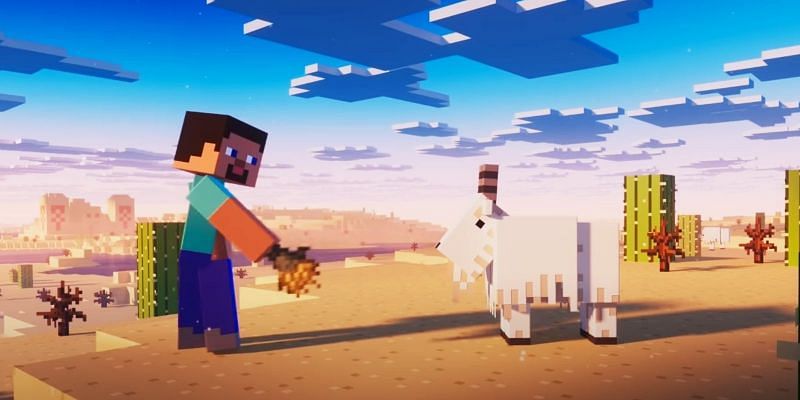 How to Get Goat Horns in Minecraft: Bedrock Edition

Goats are one of the newest animal mobs in Minecraft and they feature some interesting quirks such as a high jump height and give players the ability to harvest their horns.

Found at home in mountain biomes, goats are naturally passive to the player. However, goats possess the ability to ram into nearby mobs and players if certain conditions are met.

Every 30 seconds to five minutes, a Goat that sees a mob that isn’t another Goat or a Ghastly can charge at them up to 16 blocks away. This also applies to players who haven’t moved in a while and aren’t actively looking at the goat. However, goats will not rush players on Peaceful difficulty at all.

Minecraft: Get Goat Horns by Smashing

In Minecraft: Bedrock Edition, if players have their experimental gameplay toggle enabled, goats can drop their horns after colliding with a solid block during a charge. Up to two horns can be dropped per goat. Currently, this is the only way in standard Minecraft survival mode to acquire goat horns, as goats do not drop them on death.

There have been many tactics for gaining goat horns by interrupting a charging goat, but one of the simplest involves a tree.

How the trick works:

After finding a group of goats, Minecraft players can simply move to a nearby tree or plant a nearby sapling and use bone meal to speed its growth to full size. The more goats there are in an area, the more likely it is to decide to ram a player for a random period.

Once one of the goats in the group has launched a charge, let it quickly move towards you before running behind the tree. If done correctly, the goat should redirect its direction and hit the tree blocks instead, dropping its horns in the process.

Players should be careful!

The trick may take some practice, and players are advised to have several blocks of space around them, as goat rams can potentially send players and mobs falling to their deaths from the knockdown.

For players feeling particularly security conscious, shields can be used to provide additional protection against the recoil of a Goat Ram. This won’t completely negate the impact, but it should be reduced. Shields are useful as a protective measure while Minecraft players learn to bait goat rams.

Read more: How to Make Explosive Fireworks in Minecraft