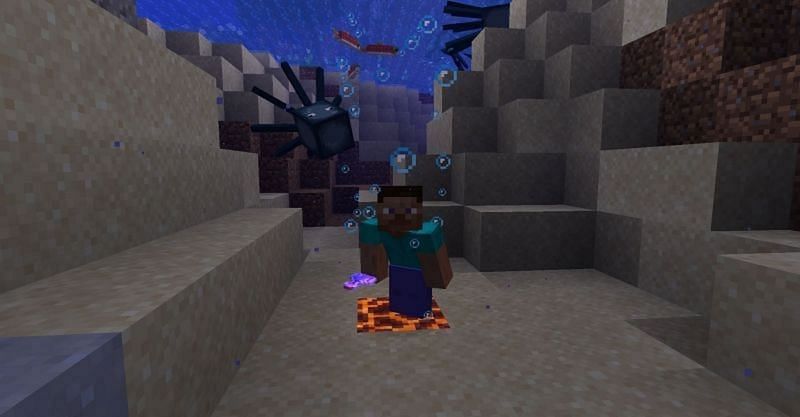 There are many Minecraft achievements for Bedrock Edition players, some more difficult than others.

One achievement, “Sleep With the Fishes”, requires them to spend a day in the game underwater with no air. While this may seem considerably daunting, it can be achieved relatively easily using different structures that still fulfill the requirement of being underwater without requiring water breathing potions.

There are several methods to earn this achievement, each with their own requirements, but a quick and effective method is known as the “magma block column” which can knock out the day’s worth of waiting in no time.

To create the necessary column of Magma blocks, all players will need the following:

All that is required for this particular method is to place the magma block in the ground, ideally where no flammable blocks are nearby. Then around where this 1×1 magma block is placed, create a column around the block that is four blocks high but still able to get the player inside.

Fill the chamber with water, making sure it is stable (like a source block) and not actively flowing. Then drop down to the bottom of the 1×1 chamber and seal the block above you like a roof. Then simply crouch on the magma block to avoid damage and wait 20 minutes to pass.

Since 20 minutes is the Minecraft equivalent of a day of play, the achievement must be earned if the user has not activated their cheats.

It should be noted that for alternate methods involving this particular Minecraft achievement, Potions of Water Breathing will invalidate the progress of the achievement. This may somewhat conflict with the achievement/trophy description if players are playing on Xbox/PS4 versions of Minecraft.

It can be confusing, but the magma block column will allow players to survive and technically stay underwater thanks to the bubbles created from the magma block interacting with a source water block.