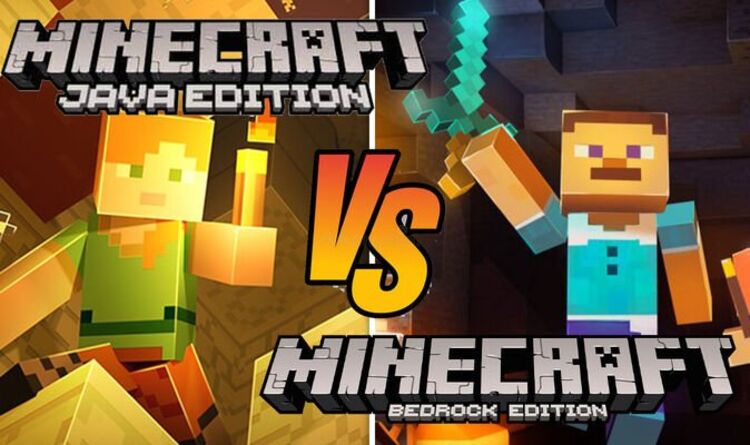 Minecraft has sold over 200 million copies in the decade since its launch. Not only that, but the hit blockbuster is the first property to rack up over a trillion views for its content on YouTube. A remarkable achievement, Minecraft is proof that video games are not just about mindless violence, but also about creativity. If you, your child, or even your grandchildren are interested in grabbing a copy, it’s worth knowing the difference between Minecraft Java and Minecraft Bedrock Edition, especially if you’re planning on grabbing a copy on a PC or laptop.

Minecraft Bedrock Edition is the most common version of the popular game. Not only is it available on Windows PC, but it’s the version you’ll find on consoles like the Xbox One, Xbox Series X, PS4, and Nintendo Switch.

If you own Minecraft Bedrock on Windows, you’ll be able to play against anyone and anyone with the console version on PlayStation, Xbox, and Switch.

Because it’s so widely played on consoles, most people play Bedrock with a controller, so you should be pretty even when playing online multiplayer.

Microsoft further explains: “The Bedrock Edition of Minecraft is available on consoles, mobile devices, and computers running Windows. Cross-platform play is supported with other Bedrock players.

“With this edition, you gain access to the Minecraft Marketplace, where you can purchase and download skins, maps, texture packs, and other types of DLC created by Minecraft and the creators of Minecraft to enhance your gameplay.”

Minecraft: Java Edition, on the other hand, is a PC-only affair. It’s not compatible with other devices, meaning Java users can’t play against friends on PS4, Xbox, and Nintendo Switch, or with friends who own the Bedrock Edition on a Windows PC.

If you’re considering buying Minecraft for the purpose of playing against friends online, be sure to find out which version they have first.

Minecraft Java Edition is also a bit more resource-intensive, which means older PCs and laptops may struggle to run it properly. If you’re not sure if your PC can handle it, check out the Website Can you run it to test your device.

While clearly not as flexible as Minecraft Bedrock Edition, Minecraft Java has its advantages. Java is generally considered to be the version of choice for die-hard Minecraft fans.

The level of opposition in multiplayer is usually much higher, and there are bigger servers and more user-generated experiences to try.

“There are countless servers and communities online with all sorts of variations and mods to change the multiplayer experience,” Microsoft says.

Personally, I favor Minecraft Bedrock because it’s a game I casually play in front of the TV on a console. I’m not interested in playing online, although I know the option is there if I ever want to.

My son plays Minecraft Java because he plays competitively and likes the bigger servers and extra mods available.

2022-02-13
Previous Post: All there is to know
Next Post: Minecraft-themed Valentine’s Day gift brings flowers from the game to life